Lee Miller was an ex-model who turned war correspondent for the British edition of Vogue magazine.

In 1945 as Berlin fell, Lee Miller found herself in Hitler’s apartment along with a fellow photographer David Scherman and some US GIs. She carefully staged the photograph, the photo of Hitler to the left, the nude statue to the right. Her dirty boots placed in front of the bath, covered in mud from Dachau, where she had been earlier that day.

Trampling the mud of Dachau around Hitler’s flat, held a joyous significance. Dachau was the first concentration camp, opened in 1933 to initially house political opponents – Communists, Socialists and trade unionists alongside other undesirables of the regime like Jewish people, until it was expanded to be part of the network of death. Hideous medical experiments were carried out there by Nazi ‘scientists’ so-called doctors. The Nazis who ran the camp killed over 40,000 people.

Then history unfolds, battles are fought and wars are won. By the end of it, Lee Miller enjoying a bath, washing away the mud, washing away the horrors, luxuriating in the very same bath that Hitler had used before he committed suicide amidst the ruins of his death-cult Third Reich. 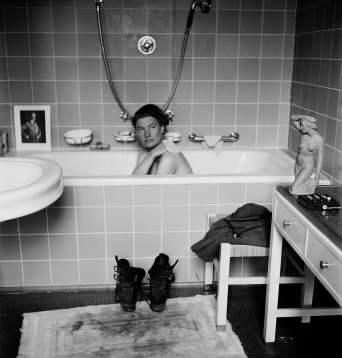