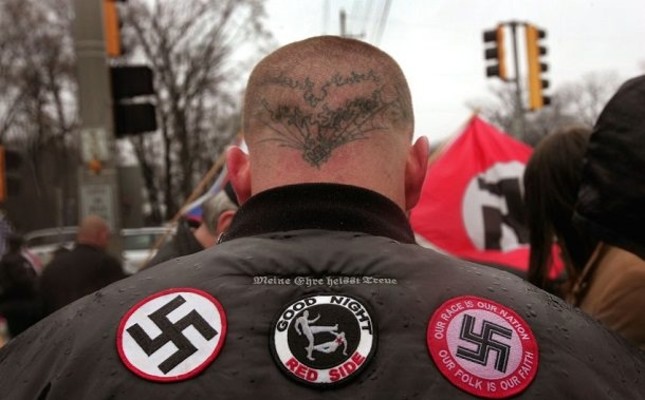 A list of recent attacks by far right, fascists and white supremacists around the world.

If I have missed any then please comment underneath the article and I can add it in.

Massacre of 69 Social Democrat youth on the island of Utoya in Norway on 22 July 2011 by Anders Breivik, a fascist who posted a manifesto the day of the attack explaining his white supremacist and anti immigrant views. He also exploded a bomb in Oslo the same day that killed 8 others.

Jo Cox MP, assassinated by a member of National Action on 16 June 2016 during the EU referendum. Her murderer Thomas Mair shouted “Britain first” during the attack.

On 22 July 2016 (the anniversary of the Utoya attack) an 18 year old gunned down 9 people in a McDonalds in Munich, targetting mainly Turkish and Kosovan people. The killer – David Sonboly – was of Iranian descent but had rejected his Muslim upbringing and been drawn towards fascist sympathies. He was proud to share the same birthday as Adolph Hitler.

On 22 April 2017, a gunman ‘with hatred for ethnic minorities’ shot and killed two people in an attack in a Federal Security Service office in the Russian city of Khabarovsk.

At the Muslim Welfare House in Islington on 19 June 2017 Darren Osborne – a man influenced by far right views he had come across online – drove his van into a crowd of Muslims, killing one and injuring nine others. Osborne was seized by the crowd and only the intervention of the imam stopped him being attacked. He was reported to shout “this for London Bridge” and “I want to kill all Muslims”. Over the following months the Muslim Welfare House received a series of death threats, including; “What Darren Osborne did was just the beginning, we will kill you all.”

In the USA Heather Heyer, a trade unionist and anti fascist, was murdered by a 20 year old neo-Nazi activist who ran her over in his car as he ploughed into a group of protestors during a demonstration in Charlottesville in August 2017. 28 other people were also injured.

In Colombia around 311 activists, including “community leaders, and human rights defenders” have been assassinated. 123 people were killed in the first six months of 2018, described by Colombia’s human rights ombudsman as “an extermination”.

Labour MP Rosie Cooper was targeted for assassination by Jack Renshaw, a member of National Action who bought a 48 cm replica ‘Roman Gladius’ sword to murder her with. Found guilty in July 2018.

Tree of Life Synagogue in Pittsburgh was attacked on 27 October 2018 by a 46-year-old man who was active on far right websites are referred to Jews as the “children of Satan.” The mass shooting left 11 dead and 7 injured.

In December 2018 German police uncovered a “secret army” of 200 German soldiers who were planning on carrying out racist murders of immigrants. The group were “allegedly a neo-Nazi faction within the Bundeswehr’s KSK – the equivalent of the SAS”.

In Ukraine the far right carried out a series of violent attacks. In October 2017 Kateryna Handziuk, a civil rights campaigner, was sprayed with a litre bottle of sulfuric acid that burned her so badly she died. the attack was carried out by a far right activist. On International Womens Day International Women’s Day in March 2018, four left-wing feminist activists were attacked. A group of Nazis burned down a Roma camp on 20 April to ‘celebrate Hitler’s birthday’. In June members of the nationalist group Sober and Angry Youth stabbed and killed a 24 year old Roma. The fascist Azov Battalion, established in 2014 to fight Russian incursion into the east of Ukraine is now an official National Guard regiment – the Ukrainian state is training and arming the far right. The Nation wrote that “Five years after the Maidan uprising, anti-Semitism and fascist-inflected ultranationalism are rampant.”

In Brazil the election campaign of Jair Bolsonar, a candidate supported by the far right, saw a surge in hate crimes, particularly directed at the LGBTQ community. The website Mapa da Violencia (“Map of Violence”)  received around 50 reports of assaults by supporters of Bolsonaro, with one woman having  a swastika carved into her skin by a gang of young men. In March of 2018, Marielle Franco, a socialist city Councillor in Rio de Jeneiro was assassinated. The two men linked to her killing were associates of Bolsonaro.

BfV, Germany’s internal intelligence agency, reported 1,600 acts of “extreme right wing violence” in the country in 2016 and 1,054 in 2017. In October 2018 Europol announced a doubling in the number arrests for right-wing extremist offences in 2017. A far right party called Alternative for Germany has support of around 20% in the polls.

In Italy there is a “a dangerous acceleration of episodes of violence against migrants” in the two months since Matteo Salvini of the far right League Party became Interior Minister in the government. Migrant’s rights campaigners recorded 12 shootings, two murders and 33 physical assaults.

A report came out in February 2019 stating that anti-Semitic attacks had risen in France by 74% and in Germany by 60% – including Jewish cemeteries daubed with Swastikas. [link]

In Christchurch New Zealand on 15 March 2019 49 dead in mosque shooting by far right white supremacist. One of the killers live streamed the rampage on Facebook. A senator in Australia called Fraser Anning released a statement blaming the Muslims for the shooting because mass migration and Islamic extermism were what motivated the shooting. Newsnight in Britain invited the leader of Generation Identity – a known fascist, Islamophobic organisation – onto their programme to discuss the massacre of Muslims.

29 March 2019 Andrew Parker, the director general of MI5,, and Cressida Dick, the commissioner of the Metropolitan police. “Over the past few years [police] have stopped a number of rightwing terrorist attacks from getting through,” they wrote. [link]

3 April 2019, reports of violence in Italy by fascists to drive out 70 Roma from a town;

“Hundreds of neo-fascists, far-right activists and local residents took to the streets of a Rome suburb on Tuesday in a violent protest against 70 Roma people, including 33 children and 22 women, who were to be temporarily transferred to a reception centre in the area. Demonstrators set fire to cars and bins, destroyed food that was meant for Roma and prevented their entry into a shelter for vulnerable people. The protesters also included members of the neo-fascist CasaPound party and the far-right Forza Nuova, who finally forced the city council to transfer the Roma women and children to another neighbourhood.” [link]

1 July 2019 “A group of German rightwing extremists compiled a “death list” of leftwing and pro-refugee targets by accessing police records, then stockpiled weapons and ordered body bags and quicklime to kill and dispose of their victims, German media have reported, citing intelligence sources.” (link)